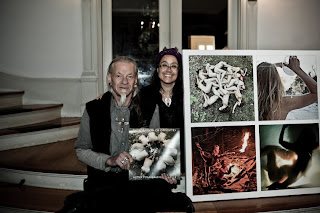 
My favorite philosopher is the late Alan Watts. And I recall a lecture where he said that art tended to be more integrated into life in the Eastern cultures. In other words, here in the West, art tends to be placed in museums and galleries, and we are supposed to go look at it and appreciate it as “Art.” Whereas, in Eastern cultures, art would be more a part of life, say, painted on clothing or fabrics, or on a money pouch or pottery or dishware, perhaps on a screen or scrim, even in a little shrine in the home. You get the idea.
And, as my arts & entertainment editor asked me to write about two new 2012 calendars by local Ithaca photographers, it occurred to me that calendars were a sort of Western way to integrate art into life … particularly the art of photographers.
Let’s see what we’ve got …
Integration of Opposites –
Astro Yoga Calendar 2012
Photographer: Damarís
Graphic Artist: 12th Moon
This is, seemingly, the sort of project that could only happen in Ithaca.
The Astro Yoga Calendar is a sort of confluence of yoga and astrology, the photographer Damarís’s practice of Kundalini White Tantric Yoga, and her Significant Other 12th Moon’s study of astrology.
It features fifteen models, performing yoga, nude, in upstate New York landscapes. The models are practitioners and instructors of yoga – a bewildering variety of yoga disinclines including Vinyasa Yoga, Somaveda Thai Yoga, Ashtanga-inspired Vinyasa Yoga, Hatha Yoga, Bikram’s Yoga, Anusara, Pure Yoga and Iyengar styles, and Acrobatic and Partner Yoga. And the models have a full range of life activities, including dance, playwriting, organic vegetable farming, photography, nursing, herbal medicine and massage.
A lot of the imagery in the calendar is quite beautiful.
The nude figures remind me a bit of Renaissance art: Michelangelo, Titian, Tintoretto, Raphael and so on … or perhaps (what inspired all the aforementioned) the classical art of ancient Greece.
My favorites are the photos for Aquarius, which features nudes in the upstate New York winter, and Sagittarius, with fire-burnished nudes, also in the upstate winter. The effect is so strange that it reminds me of fantasy art, like the work of, say, Rowena, or the Bros. Hilderbrandt, or Boris Vallejo.
Gemini, with the figures draped with a gauzy, transparent fabric, looks a bit like a Christo installation.
Scorpio, which was shot with an underwater camera, and Libra, with the theatrical artificiality of the photo’s background, look like scenes from a Fellini movie, perhaps Satyricon or Roma.
Virgo, with feathers and flowers and fruit and a misty bubble star field of underwater nudes, looks a like a Pre-Raphaelite painting (or at least the 20th century comic book illustrators who were inspired by them, like the sublime Barry Windsor-Smith).
The black-&-white-and-limited color of Leo feels like a surrealist painting by Salvador Dali.
Aries looks somewhat like classical Indian Hindu art.
Pisces feels a bit like Max Ernst surrealism.
The opening low angle shot and the closing down-shot of a mandala of multiple nudes in a forest, remind me of Hieronymus Bosch’s Garden of Earthly Delights.
And the final, biographical page shot of Damarís and 12th Moon is an especially charming composition of male and female in an ethereally beautiful time-and-water sculpted gorge.
And I can’t help but be impressed with how difficult the shoots must have been. Entailing difficult locations and terrain, multiple models performing difficult poses, nude models in the Upstate, N.Y. winter, severe downshots and underwater photography. The mind boggles.
I met with Damarís and 12th Moon, two extraordinarily appealing people, at the Wegman’s second floor café and we talked about some of those difficulties.
Damarís said, “The hardest part was scheduling … getting childcare for people who had children.”
And she said, “I feel like this has been a really good vehicle for me to learn things in my craft that I’ve always wanted to do … such as shooting underwater … I was really committed to doing as much as I could out in nature.”
She told me of one of the models for Aquarius: “She is literally turning 21 in that shot … she is watching the sun rise …”
And 12th Moon chuckled, “That was the other part – being out in the ice and snow at 4:35 in the morning …”
Damarís said the models were “up for the fun and the challenge … the only problem about being nude in the snow is you’ve got to wear shoes … everything else is doable…”
And she said, “The fire was definitely a big challenge … I had fire workers … I had to have somebody on the fire …”
And of the bio-photo, she said it was shot in “Upper Buttermilk Falls … you have to walk through the water to get to the spot – I call it ‘The Womb of Ithaca.’ We had the camera on a timer. I had like 10 seconds to hurry up over there naked and look peaceful …”
Locally, the Astro Yoga calendar is available at Greenstar, Buffalo Street Books, Mayer’s News, Sustainable Passion, The Yosa Studios, Ahimsa Yoga, Transform Yoga, The Yoga School, and is also available online atastroyogacalendar.com....... 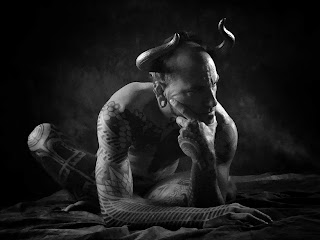 In the process of this  second session from the series of Written Images and Shooting Words, I feel I may have also ended up shooting the Devil!  What an amazing embodiment of creativity you are!


Moving through blind and summoning  portals, lifetimes  grounding infinitely  calling you/me in you were her  and then she was another  so many names interwoven symbols  I’m still making love to you at the altar  altered states; increased perceptions  awaken the heat within on hot rocks with cold bloodeds 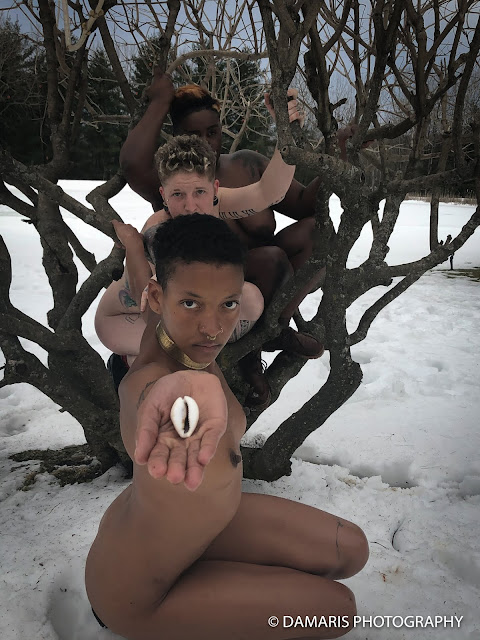 Three of Power: Further explorations for my series "Written Images, and Shooting Words" 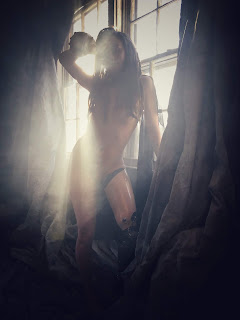 I am so grateful that I have started a new series that is very inspiring to me. I am writing erotica and creating visual scenes and merging them together in a photographic process. I am happy to share with you my first photo shoot in this effort. I love working with Dallas Pace, here, one of my favorite people to work with!  Inspired by these muses, I will write to them, and I predict will write and try to cast for the writing...and I feel it will be a fun exploration of how image creates context and a sense thru visual while words create internal images. I’m calling this phase of my work Written Images and Shooting Words.